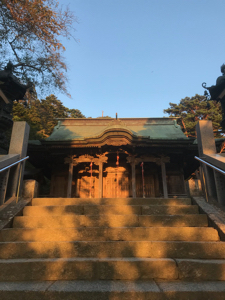 Over the weekend, I visited Kinkasan Koganëyama Jinja again. This is a jinja on an island off the coast of Miyagi Prefecture in northeastern Japan, and the closest land in Japan to the epicentre of the 2011 earthquake. I first visited in 2013, and I have been at least once every year since, so I have seen the progress of the rebuilding, and I have talked about it on the blog before.

The jinja is interesting in several ways. One is that it is on an island, and is the only human activity on the island, as far as I know. Although the island is only about 600m off the coast, the nearest harbours are some way around the peninsula that faces it, so the shortest boat ride from the mainland is about twenty minutes. (And this time, the weather was not great on the outward journey, so I was feeling more than a little woozy by the time we reached the island.) 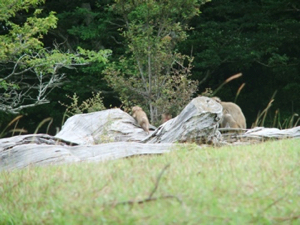 The island is notable for its populations of wild deer and monkeys. The stags are captured and de-antlered in October for safety reasons, but the deer are otherwise left to themselves, and the monkeys are completely wild. If you visit the jinja, you are bound to see the deer; they do not get fed by tourists, so they do normally get out of the way of people, but they aren’t in any hurry about it. The monkeys are less obvious, but I’ve seen them about half the times I’ve been there, including this time, when one walked past, completely ignoring me, while I was up at the prayer hall. (Several years ago, I saw a monkey family playing, but I don’t go at that time of year any more, because it’s typhoon season.)

The jinja has some elements from Shugendō in its practice, including the burning of sticks with prayers written on them during the norito offered at the morning matsuri. Anyone can attend this matsuri, but because it is held before seven am, you can only do so if you stay at the jinja the night before. That is what I do when I go, and because my schedule has me going there on a Sunday night, I am almost always the only one there. However, there are often more on Saturday nights.

Kinkasan is in a really beautiful area of Japan, which would make it a superb overnight visit for tourists with an interest in Shinto, were it not for the fact that it is almost impossible to get to without speaking Japanese. A few years ago, I couldn’t see any way around that, but now the railway line to one of the harbours serving the island, Onagawa, is open again, so it might be possible to set something up with the ferry company and the jinja to make it practical for people who speak English. I have spoken to a couple of people at the jinja about helping to organise that, but we will have to wait and see whether they have time to set it up, and the spare resources to deal with foreign visitors.