Tanabata, also known as the Star Festival, is a traditional summer celebration in Japan.

It originates in China, in a legend of a celestial weaver and cowherd, who fell in love and spent so much time in each other’s company that they neglected their work. The other gods separated them by placing one each side of the Milky Way, and they can only meet once per year, on the seventh day of the seventh month, if the weather is clear. The weaver is said to be the star Vega, and the cowherd Altair. This myth came to Japan at an early date, and the day became one of the standard festivals celebrated in the Imperial court. From there it spread to the rest of the country. The legend is still popular today, and is currently a feature of a series of adverts for one of Japan’s largest mobile phone companies.

Another associated custom that was taken from China and also became popular in Japan was writing wishes for the next year. In Japan, they are written on long and narrow pieces of paper, called tanzaku, and hung on sasa branches (a kind of bamboo).

Although the festival was celebrated on the seventh day of the seventh month, Japan changed from the lunar to the solar calendar in 1873, and the months do not line up; lunar calendar months come about a month later, so that New Year is in February. (Chinese New Year is still calculated on the lunar calendar.) This raised the problem of what to do about these festivals, and, in general, they were just celebrated on the same date, so today is Tanabata. However, some areas kept them at the same season, celebrating in August instead.

Give the legend, this makes a big difference. July 7th is often wet and cloudy, because it is the end of the rainy season. Indeed, this year Japan has just suffered record-breaking rain across much of the country, up to 900 mm in 48 hours, which has caused confirmed deaths and widespread evacuations. August, on the other hand, is normally clear. 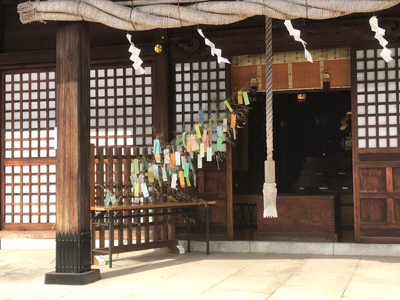 My local jinja, Shirahata Hachiman Daijin, puts a large sasa branch up in front of the prayer hall at the beginning of July, along with a supply of tanzaku and pens, and invites people to add their wishes. However, this is far from limited to jinja. Kindergartens almost always do it, and it is not uncommon at schools. You can also find them in shopping malls.

Indeed, one might wonder whether the festival has much connection to Shinto. That is a good question, which does not have an easy answer. It is a traditional Japanese festival, so in that sense it can be claimed as part of Shinto. Making written requests to the kami is definitely part of Shinto. On the other hand, most Tanabata sasa are outside jinja, and Shirahata-san has only been doing Tanabata for a few years; they did not when I first moved to the area.

Tanabata is another good example of how difficult it is to draw a line around “Shinto” in Japanese culture.