As I mentioned in an earlier post, my daughter has become interested in collecting goshuin, the vermilion seals that jinja offer as a record of your visit in return for a small donation. At the beginning of this week, we went on a short trip to Niigata Prefecture on the Japan Sea coast of Japan, and one of our main purposes was visiting jinja to collect the goshuin. 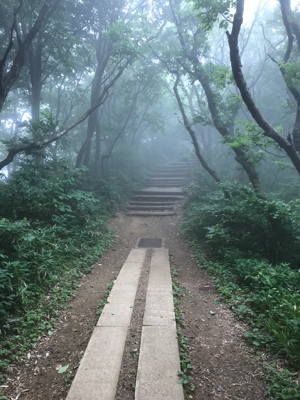 This is what a sacred path should look like.

The first jinja we visited was Yahiko Jinja. This is the Ichi-no-Miya of Echigo province; that means that, around a thousand years ago, it was considered the most important jinja in one of the provinces of Japan. These jinja still exist today, and are almost all still important jinja. Yahiko Jinja is at the base of a sacred mountain, Mount Yahiko, and there is now a cable car up to a lesser peak, which we took. The day was a bit cloudy, which made the top of the mountain very pleasant in the midst of the longest and most intense heatwave in Japan since records began.

Yahiko Jinja, like many jinja associated with a mountain, has an Okumiya, an Inner Sanctuary, on the peak of the mountain, and we walked over to visit that one as well. It was quite a walk from the tourist facilities near the cable car station, and the path was misty amid the clouds, which gave the whole location a mysterious atmosphere. 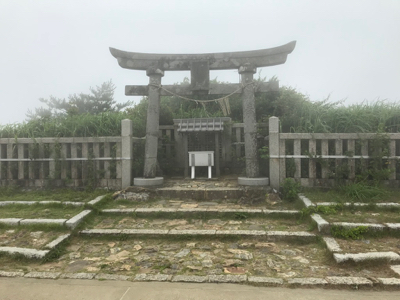 The Okumiya at Yahiko Jinja

When we reached the Okumiya, it turned out to be a mound with a torii in front of it, and it is officially the grave of the kami revered at the jinja. This is not uncommon in Japanese mythology; being dead is no particular obstacle to being an active kami, and indeed may be a necessary condition, particularly for ancestral kami. We also discovered that the Okumiya had its own goshuin, do we received that one as well.

The following day, we went to Niigata Hakusan Jinja, which is in Niigata city. This is the tutelary jinja for the whole city, and quite large. 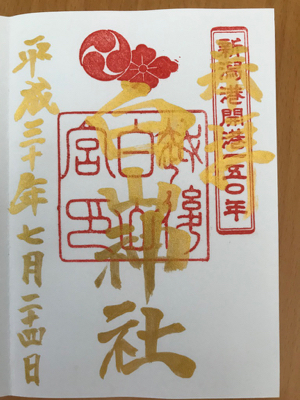 It also had an interesting selection of goshuin. There was the standard one for the main sanctuary, and then there was a special one for the main sanctuary, limited to this year, celebrating 150 years since the opening of Niigata port to foreign trade. For this one, the name of the jinja was written in gold ink, rather than the normal black. Of course, my daughter and I both had that one (which was slightly more expensive: ¥500 instead of ¥300).

They also had four further goshuin, for four subsidiary jinja in the precincts of the main jinja. We decided to get those as well, and the person who took our books off us confirmed that we were going to go round and pay our respects at all the jinja while we were having it done. We did, of course, and they had finished when we got back. This emphasises the meaning of the goshuin: it is a record of you paying your respects at a particular jinja. It is not enough to just be in the general region; you have to actually pay your respects at that jinja.

My daughter was very happy to get seven goshuin rather than the two she was expecting. I filled my book, and will have to get another one.