As I mentioned in my post about male priestly vestments, the vestments for female priests are different. When female priests were officially permitted after the war, the vestments were initially based on the formal clothes for female Heian aristocrats, just as those for men were based on those for male aristocrats. However, the robes of female courtiers, the “jūnihitoë”, or “twelve robes”, have multiple layers, are very heavy, and are difficult to move in. As a result, it was not long before a revised version was specified, based, as I recall, on the vestments of the female ritual attendants in the Imperial palace.

Just as for men, the base is a white kimono and hakama that are normally coloured, with the ranks of female priests being indicated by the same colours as those of male priests. (There is no distinction between male and female priests in the regulations for ranks.) The vestments worn over the top are, however, quite different. 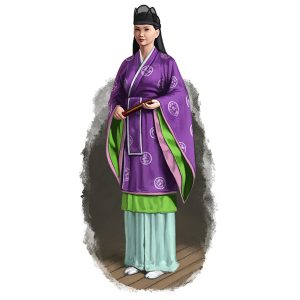 The priest in the image to the left is relatively low rank, third or fourth, and is dressed for an ordinary matsuri. Over the kimono and hakama she is wearing a green hitoë, which is optional; the regulations allow priests to leave that out, allowing the vestments to be adjusted to the season. (The regulations also allow other layers to be worn lined or unlined, for the same purpose.) Over that, she is wearing an uwagi. The colours and patterns of these vestments are much less closely defined than those for men. For men, in most cases the colour is specified, as is the decoration, but for women there are certain colours that are forbidden (the one reserved for the Tennō, for example), leaving the choice otherwise open.

She is wearing a hitai-atë on her head, and holding a bonbori fan in her hands. The fan has fifteen struts, but is never opened during matsuri. Just as for the shaku carried by men, there are detailed rules for how a priest should hold the fan, and what to do with it while bowing and clapping. 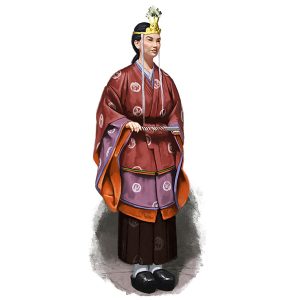 The priest on the right is upper second rank (she has faint designs on the purple hakama), and is outside, so she is wearing the asagutsu. These are also the same as for male priests. She is dressed for a major matsuri.

The first layer over the kimono and hakama is the hitoë, which must be worn with this level of vestments, and which must be this colour, or a yellow-green. She is also wearing an awagi over the hitoë, the purple layer. Over the top of that, she is wearing a karaginu. (Note: not a “kariginu”, which is part of the male vestments, but a “karaginu”.) The colour of the awagi and karaginu are largely up to the priest, as long as she avoids the forbidden colours.

Her fan is a cypress fan with sixteen struts, decorated and with coloured cords passed through the top of each strut. Those cords are wrapped around the fan, and it is never opened during a matsuri. As the fans are never opened, I confess that I do not know whether they are made so that they can be opened, or whether it has become purely symbolic.

Her headgear is a called a “saishi”. It is made of gilded metal, with artificial flowers, and white threads hanging down at the sides. The flowers are required as part of the vestments, and orange and/or white seem to be most common, but I do not think they are specified precisely in the regulations. (I have the regulations, and they do not seem to specify colour or type, but the phrase used to refer to them, “kokoroba”, may be more specific than it looks, or than a net search suggests.)

Female priests normally wear their hair long, and gathered into a single ponytail. (The priest on the left is being a bit of a rebel by wearing it loose; the regulations do not require the ponytail, but they do strongly suggest it.) Priests who prefer to keep their hair short often wear false ponytails for matsuri.

The regulations still, I believe, allow female priests to wear the old-style vestments. This was permitted as a temporary measure so that priests would not have to pay for a full new set of vestments all of a sudden, and I do not believe it has been cancelled yet. However, I have never seen a female priest at a jinja perform a matsuri in the old-style vestments; they would be really inconvenient.

This covers the priests, but still leaves miko. I will do a post about them soon.