Miko vestments are possibly the best known of the standard vestments for staff at jinja, because they feature in a lot of manga and anime. Miko wear bright red hakama (called “hibakama”) over a simple white kimono (called a “byakuë”). Because the hakama completely cover the kimono below the waist, it looks like they are wearing a white top and red bottoms, but the white kimono is also ankle length. (You can find pictures of “miniskirt miko” online without even trying; this is obviously ridiculous, as the kimono would show.) 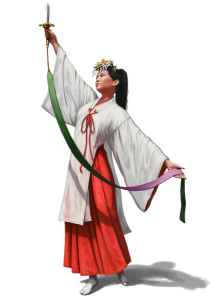 The history of these vestments is a little obscure. They are not defined by Jinja Honchō regulations, unlike those for priests, because Jinja Honchō has almost nothing official to say about miko. The vestments are, however, almost completely standard across Japan, and at jinja outside.

They are also the underwear worn with the most formal Japanese court dress. When I was interpreting at a Jinja Honchō event a couple of weeks ago, we saw people being dressed in these robes, which are called sokutai, and they started off wearing white kimono, over which the first item of clothing was bright red hakama. (This is followed by a second set of hakama, and several layers of robes.) There is literary evidence that this underwear was worn with less formal outfits as well.

So, miko are basically walking around in their underwear. Or at least, they would have been a thousand years ago. The trend for underwear to turn into outerwear is found elsewhere in Japanese costume: the standard kimono of today are derived from the underwear of the Muromachi period, about five hundred years ago. This may be part of the reason why there is a persistent rumour that miko do not wear underwear: obviously, you do not wear underwear under your underwear. That has the potential to get very silly very quickly. (I should note that, not wanting to get arrested or slapped, I have not directly asked any miko about the truth of this rumour, but my understanding is that it is not true, and that miko these days wear western-style underwear.)

Even today, in fact, the “standard” miko vestments are underwear. When miko are serving in a matsuri, rather than just helping around the jinja, they almost always put another layer over the top. The simplest version is shown in the illustration: a light, translucent over-robe called a “chihaya”. However, at some jinja it can be more elaborate, longer, and even involve multiple layers. These versions are also more expensive, which is why they are less common.

Miko wear white tabi socks and normal waraji sandals outside; they do not wear the asagutsu shoes that priests wear. As for female priests, it is most common for miko to wear their hair in a ponytail, and this pony tail is often wrapped with washi, Japanese paper. Some jinja use a simple sheet, but others use quite elaborate red and white decorations. For the dances, as you can see in the image, miko wear crowns, called “zentenkan”, or possibly “zenten kanmuri”. (I’ve not been able to find an authoritative reading for the kanji.) The item in her hand is a “kagura suzu”, bells for kagura, and this is a very common prop when miko perform sacred dances.

It is possible to buy miko vestments on standard online shopping sites, because they are a popular cosplay option. However, miko serving at jinja use proper vestments, which are quite expensive, and supplied by the jinja. I don’t think that the Shinto Establishment particularly likes the fact that people dress up as miko, but they do not regard it as a major problem. It is, after all, a free country.