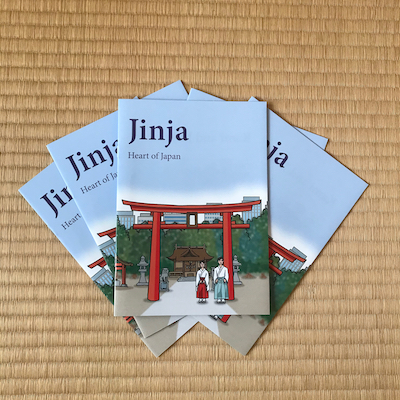 The big project I was working on with Jinja Honchō has just been completed. The big project was a small booklet called “Jinja: Heart of Japan”. This is an English booklet, intended to introduce jinja and Shinto to foreign visitors. Long-time readers of this blog may spot a bit of overlap with the purpose of Mimusubi.

The booklet itself is intended to be distributed at jinja and information centres for tourists, and is not, at the moment, available online to the general public. I don’t know whether that will change at some point, but for now, if you would like to see it, you have to come to Japan and find a jinja or information centre that has it available. A number of jinja, and Prefectural Jinjachō, have already requested it, so by the time it is possible to get to Japan again, it might be fairly easy to find.

Although the booklet is very short — the final text is just over 2,000 words — it was a lot of work. Part of the reason for that is that it is very short. Giving a useful overview of Shinto in that little space is a challenge. However, the booklet needs to be small, with lots of pictures and no walls of text, so that people will pick it up and read through. Thus, it is not sensible to put more information in.

I decided to focus on the practical side of things: what do you do at a jinja, and why? So, there are instructions on paying your respects, and having a formal gokitō performed, and on the various things, such as omamori, that you might take home with you from the jinja. As Shinto is primarily a matter of practice, this seemed like the best option, although there are a couple of pages on more general background.

The biggest difficulty with the content was that this booklet is issued by Jinja Honchō, and is available to any of the 80,000 jinja affiliated with them. Thus, the content all needs to be acceptable to all of those jinja, and consistent with Jinja Honchō official policy. Even bits that you would think would be trivial were not. For example, most people these days pay their respects by bowing twice, clapping twice, saying a short prayer, and then bowing once to finish. That is what the booklet says. However, officially Jinja Honchō does not put the prayer in at that point. (The formal structure is bow twice — pray — bow twice — clap twice — bow once.) Thus, there was some discussion about whether we could say that, although in the end we could. Similarly, we went back and forth over how to phrase the appropriate donations for omamori and gokitō, so that foreign visitors would have some idea as to how much is normal, without it looking as though Jinja Honchō was telling jinja how much they should charge.

And then there was the description of “kami”, right at the beginning. That took a lot of revisions to make it acceptable.

Part of the difficulty was that the booklet is written in English, and most priests do not speak English. I provided Japanese translations, of course, but the nuances do not carry across, so there was quite a lot of discussion with staff at Jinja Honchō who do speak English about the reasons for word choice. I’m not sure exactly how many priests looked at the text, but it included people outside Jinja Honchō.

Compared to the text, the images were relatively easy. For the cover, a miko in front of a torii. And a priest, because we know that most jinja do not have miko. Inside, we have lots of pictures of foreigners visiting jinja. I gave specific instructions that they should not all be white and blonde, and they are not; we have some white people, of course, and black, and south Asian, and southeast Asian. We even have east Asians in one picture, but they look Japanese, so there are fewer of them than, statistically, there should be. We also paid careful attention to what they are wearing. There is a woman in a short skirt talking to a miko in one image, and the sample person bowing and clapping is in jeans and a tee-shirt, but the people having a gokitō performed are dressed more formally.

4 thoughts on “Jinja: Heart of Japan”