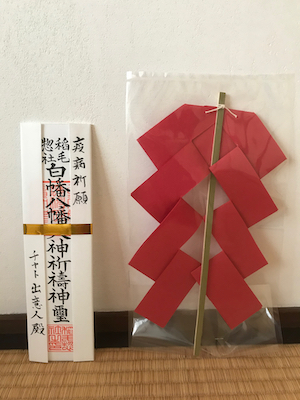 A week or so ago I wrote about the kami of smallpox, and mentioned the red gohei, or heisoku, that my local jinja had set up on top of the offering box. At that point I didn’t have a picture, but now I do.

This picture is at my home, because I asked the priests to perform a matsuri asking for an end to the epidemic, and today I picked up the ofuda (on the left) and red heisoku (on the right) that they prepared during the matsuri. Normally, one attends when a matsuri like this is performed at a jinja, but at the moment that is obviously not practical. So, I asked for it a few days ago, they performed it a couple of days later, and today I picked up the ofuda, heisoku, and the osagari (sakë and bonito flakes that were offered to the kami).

The main writing down the centre of the ofuda identifies it as the ofuda of Shirahata Hachiman Daijin, while the writing at the bottom left is my name, and that at the top right says “Yakubyō Kigan”, which means “Epidemic Prayers”. The red heisoku is, as I mentioned before, a traditional form and colour for hōsōgami, the kami of smallpox and thus, by extension, of epidemics. When not posing for photographs, both of them will normally live on my kamidana.