My local jinja, Shirahata Hachiman Daijin, has a matsuri called the “First Rabbit Festival”, because it is held on the first day of the rabbit in March. That is today. (This is as late as it can be, because the days cycle through the twelve animals of the Chinese zodiac; this year, the last day of February was a day of the rabbit.) 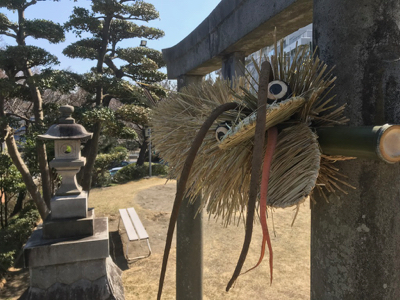 This festival has a number of features, but one that is very visible is the large snake made of rice straw that is hung on the jinja’s second torii before the matsuri begins, and is left there until the summer festival, when it is taken down at the beginning of the day. By mid-July, it is usually looking a bit sad, but today it looks quite cheerful.

The body is made of rice straw from the local rice fields, and the horns, eyes, and tongue are made from local vegetables, a reminder that this used to be a farming area (as recently as fifty years ago), and that some farming does still happen. 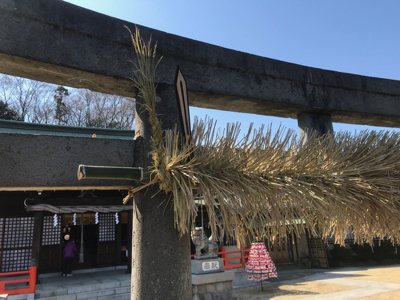 The tail of the snake has a wooden sword attached to it. This is a reference to Susano’o’s battle with the Yamata no Orochi, a giant snake, in the legends found in the Kojiki and Nihonshoki. At the end of that battle, he found a sword called Amënomurakumo no Tsurugi in the tail of the serpent, and presented it to his older sister, Amaterasu Ōmikami. It later became one of the Three Sacred Treasures brought to Japan by the ancestor of the Imperial line, and is now believed to be enshrined as the go-shintai at Atsuta Jingū in Nagoya.

The First Rabbit Festival is an agricultural festival, concerned with praying for a good harvest, and including an archery ritual that is, in part, about predicting whether the harvest will be good. So why a snake?

I suspect that the reason is that snakes are closely associated with rivers in Japan, and rivers are absolutely essential to wet-field rice agriculture, which is what is practised in this area. Water from the river is needed to flood the rice fields, but if there is too much rain, the river can sweep the fields away. (This is widely believed to be the point of the Yamata no Orochi myth.) Thus, praying that the rivers will behave themselves is extremely natural.

This matsuri is only performed at Shirahata Hachiman Daijin, to the best of my knowledge, and is thus a good example of the local nature of much of Shinto ritual.